I’ve got a new Vue course in the pipeline. It’ll be taught entirely online so you won’t have to leave the comfort of your home and you can work at your own pace. Stay tuned for more details…

This is a screencast of a lesson I did last year on InDesign. As I’ve been getting a lot of requests about indesign I thought I’d share it with you all.

Posted by Zane Egginton on June 11, 2013 in Design, Tutorial

Over the last couple of weeks I’ve uploaded a couple screencasts to YouTube related to the creation of terrains using the mesh tool. I thought I’d post them here too for all to see. END_OF_DOCUMENT_TOKEN_TO_BE_REPLACED

Posted by Zane Egginton on April 9, 2013 in Tutorial

I recently recorded this for a e-learning symposium. It’s a basic overview of how I use screen casting (and audio recordings) to augment my classes. It includes software (Screenflow, Camtasia and Jing), hardware and basic workflow. Enjoy.

Posted by Zane Egginton on February 28, 2013 in Education

I was just checking out the new term over at fxphd and noticed a little something some of you may be interested in; a new unannounced plant modelling software from e-on (makers of Vue) called “The Plant Factory”. 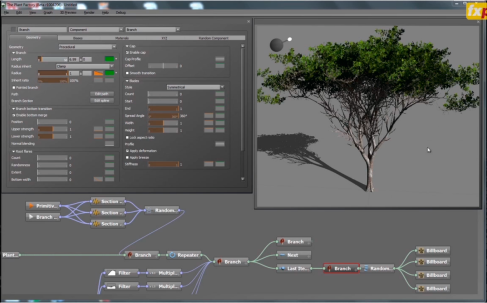 From the screen shot it appears to be a standalone tree/plant modeller that can create plants similar to that found in Vue however it has a lot more controls to create trees from scratch (in Vue you can only modify existing Vue plants). It appears to have the ability to create procedural geometry as well as use paths and splines for the shape of branches. You can also adjust the strength of limbs (presumably for wind effects), add random variables (to create different instances of a plant), an internal renderer with atmosphere settings,  and uses a nodal interface to control the whole process.  After a little googelling I discovered they have a website too; http://www.theplantfactory-tech.com/

The plant factory website has had a couple new posts recently, one is about integration with other programs. They name Vue but also mention that it’ll work within other CG programs (unnamed). At a guess it would similar to other e-on products so I’d expect to see it in 3ds Max, Cinema4D, LightWave, Maya, and Softimage

Theres also a slightly older post showing some examples of plants made with the plant factory. Looks really really good! Check them out.

As soon as I get a copy (not sure when it’s being released) I’ll post something here. Stay tuned…

I was heavily involved in the making of this including VFX advice, shooting the green screen footage at my studio and grading the final film (see my previous post). I also did some additional camera work on location and produced some concept imagery/pre viz during pre-production. Cheers to Damon for putting this online and getting me involved, it was an awesome experience.

[Opps, this should have been posted a couple weeks ago.]
After 32 days traveling I’m finally home. Places visited; Hong Kong, Den Haag, Bernburg, Dessau, Leipzig, Dresden, Berlin, Rotterdam, Schaijk (near Oss in the Netherlands), Enkhuizen, Amsterdam, Utrecht, Brisbane, Surfers Paradise, Coolangatta, Byron Bay, Lennox Head and Skennars Head. Not a bad effort aye! In the last post I was on my way to Dresden for an afternoon then onto Berlin for a couple days to hang out with Simon (Brother), Rubin (Dutch Cousin), Jan (a friend also from NL), and my Mother, and we had a blast! Instead of writing lots I figured I’d just put a bunch of picture here instead, enjoy;

Berlin – It’s just like the blobby shapes I’d did for a research project (have a rummage through my posts).

Berlin – Close up of Blobby Building

Berlin – A couple beers for lunch.

Enkhuizen – In the North of Holland.

Enkhuizen – Such an awesome little town.

Enkhuizen – Yes, its a goat.

Amsterdam – Yes, it’s some boats, in Amsterdam (near the Nemo Building)

The centre of Utrecht.

This isn’t unique, most of the old buildings in the netherlands are a bit crooked.